The history of New Buffalo goes back to 1834 when Wessel Whittaker and his crew were bound for Chicago from Buffalo, New York. A savage November storm grabbed control of their vessel and hurled it onto the Lake Michigan shore. Whittaker and his crew managed to struggle ashore near the current village of Grand Beach just south of New Buffalo. The New Yorkers, en route to St. Joseph to report the loss of their ship, came upon a harbor which Whittaker was certain could rival the port of Chicago. Captain Whittaker determined that he would return to the scene of his calamity and found his "New" Buffalo. 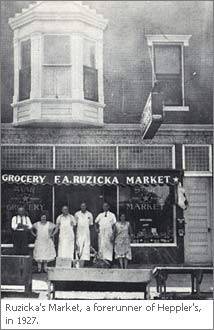 Captain Whittaker wasn't the first visitor to New Buffalo. The Miami, Iroquois, and Pottawatomi Indians all fought for control of the area. The Indians, and the game and fish they cherished, also attracted French traders and missionaries. But it was our Captain Whittaker who first made New Buffalo a permanent community.

The Gateway to Michigan

Whittaker, along with friends and relatives, returned in 1835 and began to develop and promote their dream. Sawmills were constructed and log buildings for every purpose were built. More settlers arrived from New York and the South with not just dreams but expectations of riches to be harvested here.

These pioneers soon learned the value of tourists. Land travelers between Detroit and Chicago meandered through New Buffalo and spent their tourist dollars here. But in the late 1840s, the Michigan Central Railroad Company completed the stretch of track between Niles and New Buffalo, making New Buffalo the end of the railroad line for travelers between Detroit and Chicago. An unprecedented scale of tourism quickly reshaped the town's character. 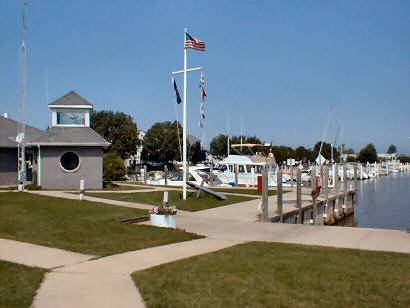 Although the railroad continued to contribute to the local economy, it was not until the 1900s and the age of the automobile that New Buffalo re-established its link to tourism. In 1934 the State recognized New Buffalo as "The Gateway to Michigan" and built a tourist information center here.  At this time US 12 was the main southwest Michigan artery, intersecting with the final cross-state destination for the historic Red Arrow Highway. With the advent of the Interstate system, I-94 has now paralleled the Red Arrow route.

Wessel Whittaker's vision of New Buffalo's Harbor may have been matched by local contractor Paul Oselka's. He began dredging the harbor and the channel leading to it in the 1960s. By 1975, New Buffalo's safe harbor became a reality and the new Whittaker Street bridge was dedicated. Although not quite equal Chicago's, Wessel's harbor dream has finally come true.

Access to River, Lake or Stream
Add to Map