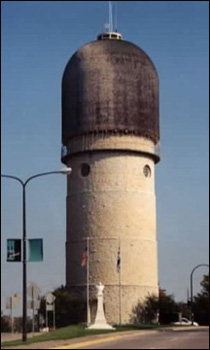 The Ypsilanti Water Tower, with its 85 foot base constructed of Joliet limestone, holds a 250,000 gallon steel tank, was the only structure of its kind serving the community until 1956 and in 1974 the tower was designated an American "Water Landmark" by the American Water Works Association. Restored two years later, it also has been named as a Historic Civil Engineering Landmark by the Michigan Section of the American Society of Civil Engineers.