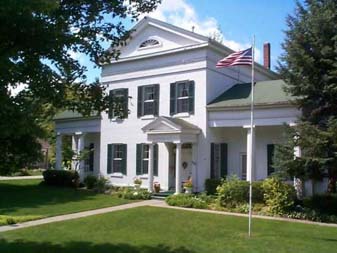 Voted "The Most Comfortable Lodging in Southern Michigan," the historic Munro House B&B is the oldest house (1834) and first brick building (1840) in Hillsdale County.  This  Greek Revival Mansion,  once a station on the Underground Railroad,  is the oldest Southern Michigan Bed and Breakfast originally built as a private residence.

In 1840, George Clinton Munro bought a Federal Style wood frame house on this property.  Six years later he constructed the brick Greek Revival addition that is connected to the original house.  This addition included a secret room which was used to hide runaway slaves for more than 15 years before the start of the Civil War.  It's thought that the house harbored over 400 men, women and children as they made their way towards Canada and freedom, many of them spending at least one day here. The Munro Family lived in this house until 1945 when three elderly Munro sisters were evicted after ten years of non-payment of taxes.