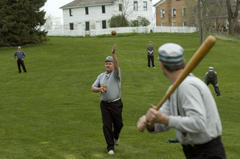 First opened by Sylvester S. Walker and his wife Lucy who came to Michigan from Cooperstown, New York where they had owned other taverns, the Walker Tavern, which dates back to the late 1830s, was a stage coach stop.  At the time, the trip from Detroit to Chicago took five long days and the tavern was located at a perfect stop for travelers on that arduous journey. It was situated at the point, called Cambridge Junction, where the Sauk Trail (now U.S. 12) and a turnpike built by a private company that ran from the La Plaisance Bay on the northwest shore of Lake Erie to the settlement of Jacksonburg (the present-day Jackson) crossed some 30 miles southeast of Jacksonburg. Known as ‘the best west of Detroit," the tavern was so popular that a larger brick building was built across the road in 1854 to service not only travelers but the local community. It became a tourist attraction in 1921 when Frederick Hewitt, an Episcopal minister, bought the tavern. In 1965, the State of Michigan acquired the property and restored it to its 1840s condition.

Now visitors can step back into the past and experience life in Michigan when it was a frontier settlement and during the state's stagecoach era. The tavern includes an 1840s parlor, bar room, dining room and kitchen. There is also a Visitor's Center, barn and exhibits revolving around the people who traveled along these historic crossroads.