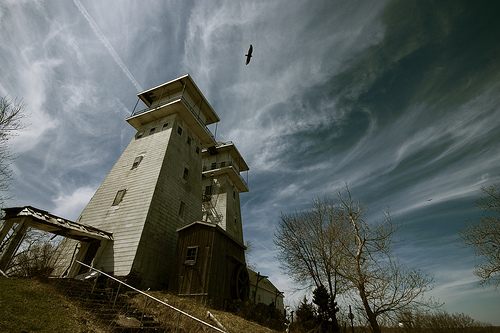 Courtesy of Michigan In Pictures

Built in 1924, the first of these twin towers was opened by the Michigan Observation Company so that visitors could view the undulating landscape from its highest point.  A "spite tower" was built soon after.  And still later, both of the towers' owners opened restaurants catering to tourists.  At one point there was even a tourist hotel just to the east of the towers.  Now, surrounded by large boulders, the towers, though not open to visitors, remain tall sentinels on U.S. 12.

More About the Towers

Views of the Tower